Saturday 25 June marks the eighth National Armed Forces Day, providing an opportunity for the people of Northampton to demonstrate their huge support for their Armed Forces. 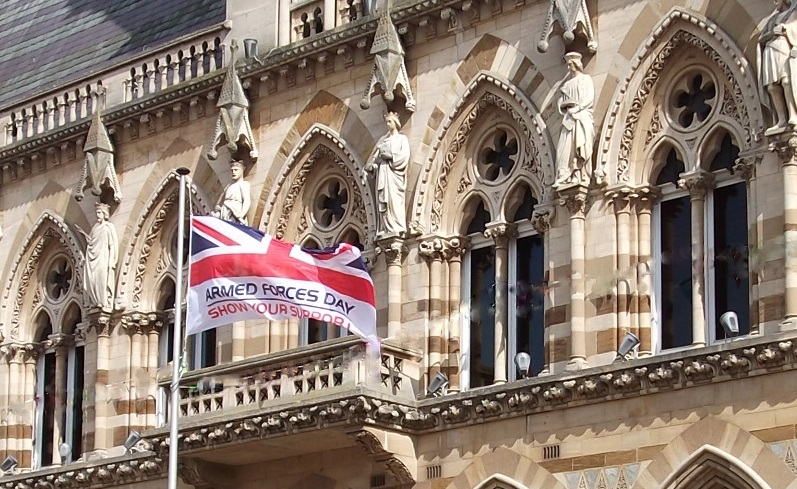 Local celebrations will be taking place on Monday 20 June and Saturday 25 June. The celebrations are a chance for everyone to show their support for past and present servicemen.

Cllr Mary Markham, Leader of Northampton Borough Council, and Mayor of Northampton, Councillor Christopher Malpas and members of the Council will start off the celebration by raising the Union flag in a short ceremony at the Guildhall at 10am on Monday 20 June.

On Saturday 25 June, a marching parade consisting of serving troops, veterans and cadets will gather at the top of Abington Street (Near Radio Northampton) at 10am before they begin a parade through the town at 10.30am. The procession will end at the Market Square where they will take the salute of the Mayor and Lord Lieutenant Mr David Laing

The Royal British Legion have also organised a Northampton fly past by an RAF Hawker Hurricane at 4.20pm on the same day. The Hawker Hurricane became renowned during the Battle of Britain, accounting for 60% of the RAF's air victories in the battle, and served in all the major theatres of the Second World War.

On the Market Square there will be a host of activities and displays for the public to enjoy throughout the day, including vintage vehicles and reserve force displays. The day will be a chance to find out more about the activities and work of soldiers and RAF personnel from locally based units.

Cabinet member for community engagement Cllr Anna King said: “I am delighted we will have the chance to celebrate and honour the important work of our armed forces, past and present. I would encourage everyone to come into the town centre to celebrate Armed Forces Day to show how proud we are of our veterans, cadets and active service personnel."