The Council is required to reassess conservation areas on a regular basis and consultation on a review of St Giles Conservation Area was undertaken between 11 November and 23 December (5pm) 2019. The reappraisal was adopted on 19 February 2020 and can be downloaded through the link below:

Other documents relating to the Conservation Area can be downloaded through the links at the bottom of the page.

St Giles is situated in the eastern part of the town centre. Cheyne Walk and York Road follow the alignment of the old Town Wall which bounded the town on its eastern side up until the 15th century. The name “Cheyne Walk” is thought to derive from ‘Walk to the Chain Fulling Mill”.

The splendid mediaeval church of St Giles’ provides the central feature of the conservation area, but any buildings contemporary with the Church have long since disappeared. Those now surrounding the Church mostly date from the 19th century. Robert Browne, the founder of the Congregational Church movement, is buried in St Giles’ churchyard.

The Conservation Area extends from the old ‘Darngate’ or eastern gate in the town wall northwards towards what was ‘St Edmunds’ End’ now known as Abington Square.

Most of the buildings are Victorian, but the parish church of St Giles’, dating from the 12th century, dominates the area.

Cheyne Walk, in the southern part of the area, displays a most attractive row of Victorian villas, once occupied by some of the wealthier of Northampton residents, but now almost entirely given over to office and club use. This change has proved beneficial in ensuring that the buildings, many of which are listed, are well maintained, both structurally and environmentally.

Intersecting Cheyne Walk to the north, Spencer Parade exhibits a row of villas which are perhaps even more impressive than those of Cheyne Walk. The varied architectural styles enjoyed in the early 19th century ‘mediaevalist’ period, abound here and designs range from Jacobean, with multi-gabled façades to ‘Tudorbethan’ with battlements and pinnacles. These are complemented on the north side by a fine row in classical style and of the same period. Renovations and extensions have generally been of a high standard.

Spencer Parade offers one of the best views of St Giles’ Church, partially secreted within the heavily wooded churchyard. The church was virtually rebuilt in 1616 after the original tower collapsed, destroying much of the building. Of particular interest is the fine Romanesque west doorway, a 19th century reconstruction of Norman work. A particularly beautiful example of Victorian glass painting is displayed in the magnificent east window. The tower contains an impressive set of ten bells.

Near to the Church is an interesting pair of Victorian ‘Gothic’ buildings: St Giles’ Church School, built in 1864 by E F Law (now the Parish Centre), and St Thomas House, a Gothic style alms-house erected in 1834.

Between them, at the eastern end of St Giles’ Street, stands an imposing row of 19th century red-brick houses in Carolean style by Matthew Holding (nos 81-87), now mostly converted to offices.

To the north of the church in St Giles’ Terrace, a delightful red brick Victorian row (nos 1-8) provides a transition from the more peaceful atmosphere of St Giles’ to the busy shopping centre on Abington Street.

York Road, like Cheyne Walk, follows the line of the mediaeval town wall and features on its west side an attractive row of Victorian villas in modified Tudor style, still mostly occupied as dwellings.

At the corner of Billing Road, and Cheyne Walk, the King Edward VII memorial provides an attractive foreground to the impressive 18th century hospital building.

Unfortunately the high traffic volumes in York Road and Cheyne Walk (part of the inner ring road around the town centre) reduce the environmental quality of this part of the Conservation Area. 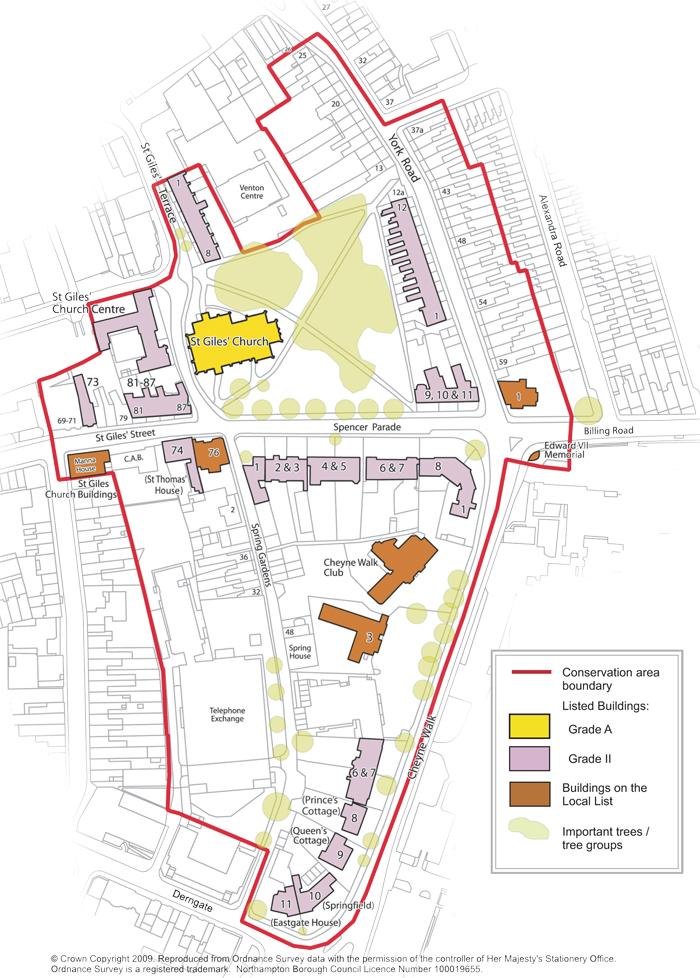