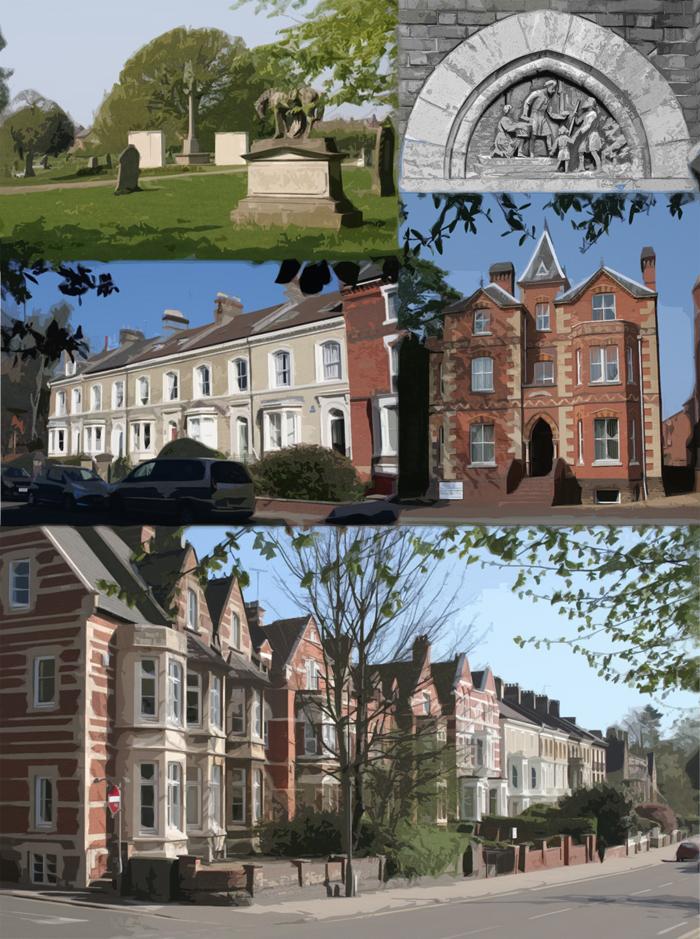 Development of this area did not proceed outwards from the town centre in an orderly fashion. Most of the buildings along the Billing Road date from the 1860s to the 1880s, and show a variety of styles and tastes which co-existed during that period.

Cliftonville and the central part of Billing Road were developed first, around 1850-60, with substantial residences set within their own grounds. Lyveden Terrace (nos 45-49 Billing Road) dates from around the same time, whilst other terraces followed in subsequent decades. Addison Villas, by noted local architect Matthew Holding, were among the last buildings to be completed, with the exception of more recent infill development.

Characteristics of the area

There is a marked contrast between the appearance of the north and south of Billing Road. The hospital buildings and grounds dominate the south side, while opposite sit large south-facing villas and imposing terraces. This is again contrasted by the nine tightly-packed terraced streets which join the Billing Road at right angles from the north – some of which have been included within the new Boot and Shoe Quarter.

Although the uses of many of the buildings have changed over time, the area remains fundamentally unaltered since 1890 and retains its air of prestige. This is an area of exceptionally consistent high- quality buildings. Almost all of the 80-plus buildings included within the proposed boundary are either listed or are of local list quality (noted for their special local architectural and historic interest).

Boundary walls and railings, entrance gates and piers (solid supports) are a characteristic feature of this area, demonstrating ownership boundaries, and, together with the evidence of many original individual house names and terrace names, proclaim a special pride in property. Fine examples of the use of local building materials and a diversity of architectural embellishments add to the lively street presence of the buildings.

The Billing Road Cemetery opened in 1847. It was originally established by private enterprise on a then out-of-town site. It provides a contrasting oasis of green and calm within a now urban setting. Single mature trees, some of which may well date from the late 19th century, punctuate the street scene with great presence and add to the genteel character of the road. This is in contrast to the neighbouring Boot and Shoe Conservation Area which is characterised by few trees and greenspaces. The addition of other garden trees provides summer shade and interest which counteracts the impact of this busy traffic route. 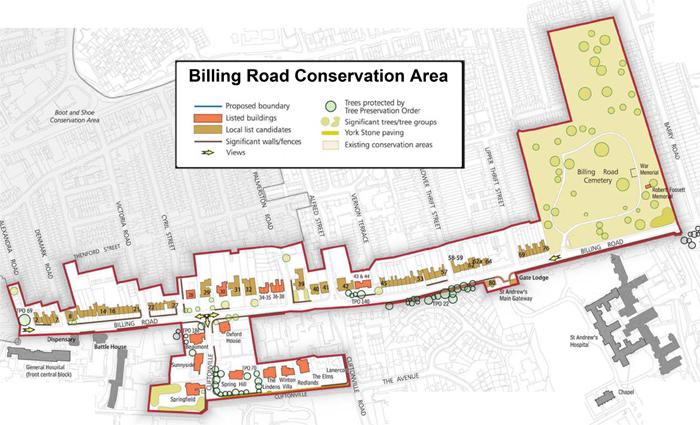 Northampton Borough Council held a consultation between 18 October to 29 November 2012, which is now closed.

Following a Cabinet decision, Northampton Borough Council have made a Direction under Article 4 of the Town and Country Planning (General Permitted Development) Order 1995 (as amended) for the Billing Road Conservation Area.

The Direction can be found in the Document Downloads section below.