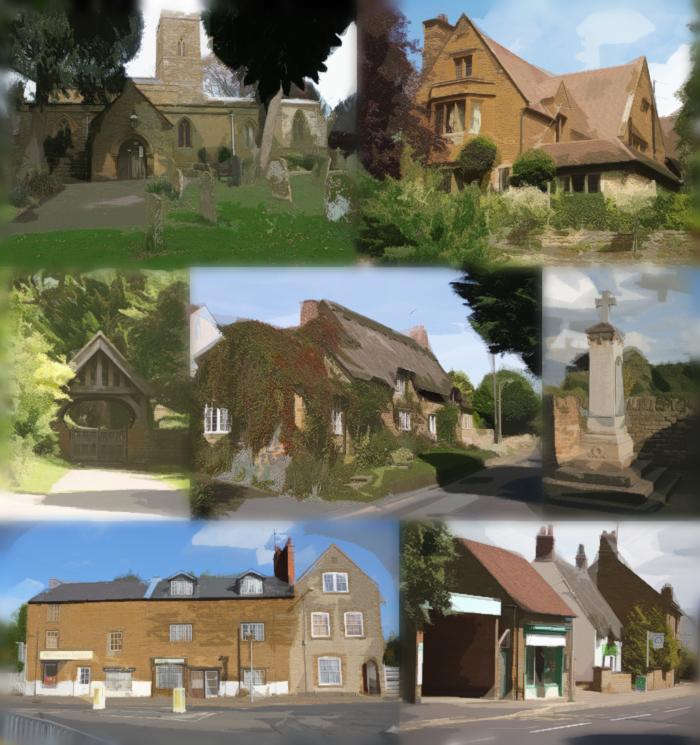 Duston village is situated 2 miles west of Northampton’s town centre. It is one of a string of settlements along the top of the northern valley slope of the River Nene, and is a village with a long history of continuous occupation, at least since Saxon times. It was recorded as a farming community in the Domesday Book, and extensive evidence of a large nearby Catuvellauni settlement and Roman camp was discovered during mid 19th century ironstone mining operations to the south-east of the church. St Luke’s Church is now to be found on the eastern edge of the old village and it seems likely that the village nucleus has gradually moved westwards in a linear fashion along Main Road. The names Peveril and Melbourne are found in the village record as former lords of the manor.

Since the 1950’s the historical village has been engulfed on all sides by the expansion of Northampton.

Duston contains many attractive buildings and features, but the groups of old buildings are sporadic and infilled by more modern development, giving a rather mixed character to the conservation area. Most of the older buildings (a high proportion of which are listed) are constructed from the local brown sandstone (Rich Ryeland) which, until recently, was quarried nearby. Local quarries also used to provide roofing material in the form of a slate known as “White Pendle”, but this is no longer to be seen in the village. A few of the roofs are thatched, but most are slated or tiled.

One of the features of the village is the prevalence of stone walls, which add to its character, although some of these have disappeared in recent years to make room for new development. Some of this new infilling has paid less regard to the character of the village than is desirable in a conservation area, the over-development in Holmleigh Close with the consequent loss of a fine group of trees is a case in point. Conversely, the 1980s shopping development fronting Main Road has been carefully designed to blend in with the general character of the area, with its modest scale, traditional detailing and choice of materials.

St Luke’s Church is an early monastic church, built some time before 1113 by William Peveril, and given by him to the Augustinian monks at St James Abbey as a place of worship. The late 13th/early 14th centuries saw the addition of the chancel, aisles and south porch. Some features survive from an earlier Norman edifice, but nothing remains of the wooden Saxon church which preceded it.

The approach to the church, with its handsome Lych Gate (1907) and landscaped setting provides tranquility to this part of the conservation area. This corner is particularly worth a visit. At the entrance to the narrow lane leading to the church is the war memorial, paying homage to those who died in both World Wars. The war memorial and its setting add a certain charm and interest to the entrance to the conservation area.

Across the junction with Millway is a prominent building which was, until recently, the village’s Primary School. It opened in 1856 as a Church of England school for the education of the poor.

Apart from the church the oldest buildings in the village date from the 17th century, including ‘The Cottage’ in Squirrel Lane, and ‘The Elms’ in Millway, one of the few former farmhouses still surviving. A number of farmhouses populated the northern side of Main Road.

While the farmhouses have gone, many of the farm buildings have survived, converted for human habitation, as at Holmleigh Close.

These farm building groupings also explain a curious characteristic of the building pattern in this part of the village, with half-hidden courts secreted behind the main street façades.

One of the major problems besetting Duston is traffic. A great deal of new development has taken place to the west of the village, with the result that there has been a massive increase in the volume of traffic passing through the village on its way to the ring-road or to the town centre. Added to this is the parking problem caused by the village’s popularity as a local centre for a wide residential area.

Trees are not prominent in the central part of the village, which is predominantly commercial in character. There are, however, significant groups of mature trees in pockets away from the main shopping areas. 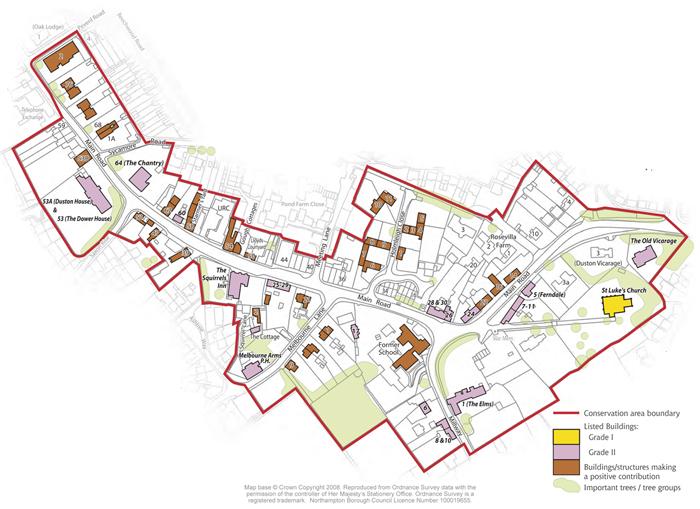