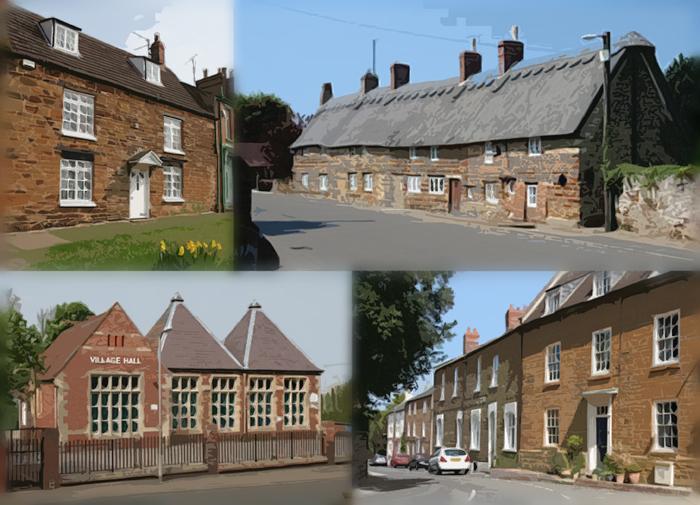 While archaeologists have found evidence of Iron Age and Roman settlement in the area, the earliest mention of Hardingstone, as with so many of the villages around Northampton, is in the Domesday Book. The village appears to have developed along an west-east drove road following the crest of the valley slope above the River Nene, and the ancient parish included mills along the river which must have been significant sources of revenue.

Hardingstone became almost entirely church land in the 12th century, supporting the leper hospital of St Leonard (in Far Cotton) as well as the Cluniac Abbey at Delapre. The parish church of St Edmund dates from 1223, but no other building in the village survives from before the 17th century, when stone began to be used more often for domestic dwellings. Most of the buildings forming the old core of the village are predominantly of the local brown iron-rich Jurassic sandstone. Evidence from the medieval field patterns seems to suggest Hardingstone was a poly-focal village with two separate parts one centred around the war memorial and Back Lane, the other around the church and junction with Coldstream Lane. There has been much infilling between the historic buildings, mostly of rather ordinary quality, diluting the historic character of the old part of the village.

The majority of the early houses are built right up to the pavement, though higher status houses, such as Hardingstone House and Mulberry House are set back from the road in their own grounds. 20th century infill tends to be set back from the road with stone or brick walls, although the most recent additions (as at 34-38 High Street) follow the earlier precedent of building up to the highway line. Boundary walls thus play an important part in uniting the disparate elements of the conservation area. Walling materials generally mirror the range of brick and stone used in the buildings, and they display a wide range of traditional capping techniques.

Between the Church and the war memorial, the street is flanked on the one side by two-storey stone-fronted cottages, and on the other by large trees in the gardens of the Back Lane houses, overhanging the road. The row of 19th century cottages placed at right angles to the road on the northern side marks a . The views open up as The Green is approached from the west. Several of the buildings at this point are of high quality, but the pleasing effect is reduced by gaps and unsympathetic infilling.

The area surrounding the memorial at the junction of Back Lane, High Street and The Green provides the main focal point of the village. The Green enjoys a good sense of enclosure, and the buildings bounding the east side form one of the finest groups in the village. These are not all of the same period but the majority date from the early to mid 19th century. Although some alterations have been made, they retain much of their original architectural character.

Many Northamptonshire villages have "Back Lanes". That in Hardingstone seems to have been of very early origin, and describes a long loop to the north of the High Street, dividing into two sections, each of distinctive character.

Running north-east from the war memorial, Back Lane retains regular and imposing stone façades, while high walls add a sense of enclosure to the street views. At the junction with Houghton Hill, the road swings to the west and narrows considerably, with the street views dominated by large trees.

Here the older buildings consist of large distinctive late C18 / early C19 houses, sited in extensive and well-treed gardens; while part of the northern side of the road is occupied by modern bungalows. The steep gradient falling to the north ensures that fine views are gained across Delapre Golf Course and Nene Valley Way towards the town centre. 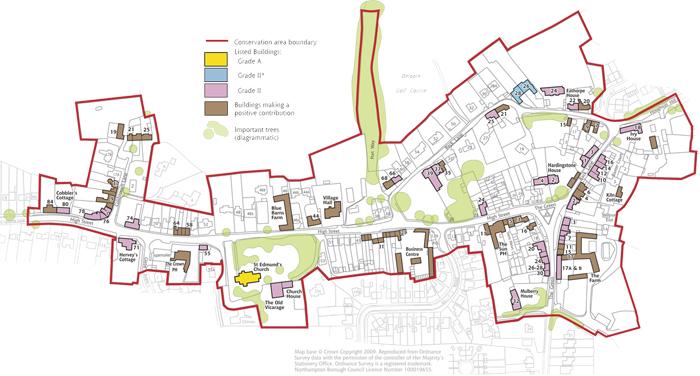