In July and August 2018 the Council consulted on a proposal to extend planning restrictions within the Conservation Area by an Article 4 Direction.  Further details will be posted as soon as they are available.

Great Houghton is situated approximately two and a half miles south east of Northampton town centre and is on the eastern fringe of the Borough of Northampton, just south of the A428 - Bedford Road. The village at present retains its separate identity as it is detached from the urban part of the town. It is situated on rising ground and forms basically a linear pattern of development along the minor road which runs between Bedford Road and the village of Preston Deanery.

Great Houghton has been bisected by a deep cutting containing the former Northampton to Bedford branch railway line.

The village rises on the southern side of the Nene Valley from 200' O.D. to a height of 326' O.D. at the present southern limit of settlement. It is quite detached and is completely surrounded by green open fields. The village commands an important elevated setting on the edge of the Borough and also forms the skyline for many views across the Town and the Nene Valley.

The old linear pattern of the village has recently been further disrupted by expansion on the east side. That part of Great Houghton south of the former railway is largely comprised of groups of recently constructed dwellings, and planning permission for over 50 more houses has been granted. On the west side of High Street, Great Houghton House is an attractive feature with its stone wall frontage. This building, together with the adjoining stable block, is a protected Listed Building.

To the north of the former railway is a nucleus of older buildings with some infilling by more modern houses. This part contains the Church of St. Mary, two public houses and a small village shop among its non residential uses, and many listed buildings. It is the core of the village and many of the buildings are in local stone along the village street and around the 'green'.

The conservation area includes most of the original part of the village on the north side of the railway. The excluded parts comprise comparatively new dwellings situated close to the Northampton/Bedford Road.

To the south of the railway the important buildings, which are in any case listed, are more scattered and therefore less suitable for inclusion in the conservation area.

The conservation area consists mainly of well maintained residential properties, although the irregular shape of some plots has led to small parcels of land being neglected.

There is a mixture of building materials within the conservation area. The older buildings along the High Street and Cherry Tree Lane are generally built in stone whilst the more recent dwellings between High Street and Willow Lane are built in old red brick. The visual impact of bricks is lessened to an appreciable extent by the stone walls which are found on at least one side of all roads in the approved conservation area.

The village as a whole is loosely knit together, many of the significant buildings like the School and the Rectory having large gardens. This lack of unity has been compensated by the many groups of trees within the conservation area which bind the village together and create important features in the landscape of the village.

The significant area of open space is that by the War Memorial and the green by the Cross. In addition there are a number of undeveloped and incidental open spaces within the approved conservation area. There are large gardens to the preparatory school and the Rectory; several of the dwellings have large gardens and there is open grazing land off Cherry Tree Lane.

As commercial premises within the approved conservation area are confined to the two public houses, advertisement signs are not prominent, and none are detrimental to the appearance of the area. Overhead cables in the High Street are rather unsightly and present an obtrusive element.

From the village there are impressive outward views north and west across and along the valley of the River Nene and of the town beyond. To the east, the view is of open countryside along the valley to the villages of Ecton and beyond to Earls Barton on the skyline. 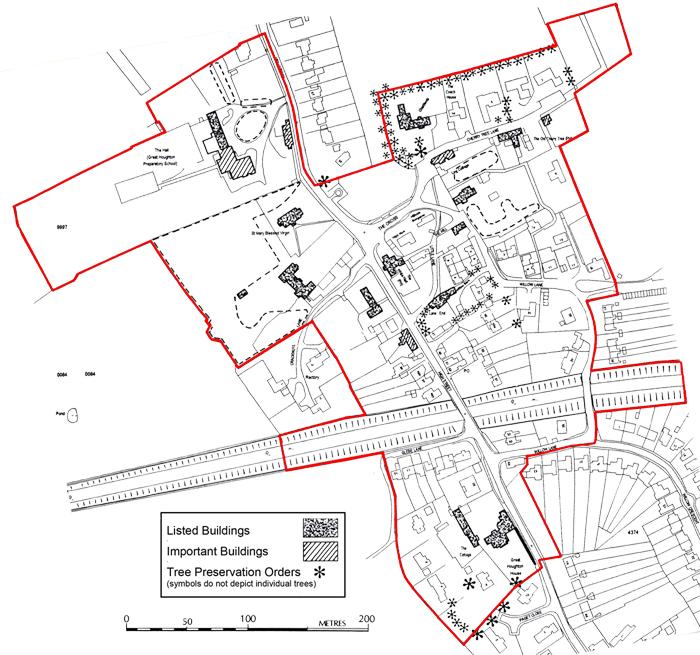