In July and August 2018 the Council consulted on a proposal to extend planning restrictions within the Conservation Area by an Article 4 Direction.  Further details will be posted as soon as they are available.

The boundary of Great Billing Conservation Area was revised to remove properties on Cumbrae Drive from that date.

Settlement at Great Billing in Saxon times took advantage of the fertile Nene Valley, a good water supply on the spring-line and the south-facing valley slope. The village supported an agricultural community, with life centred on the Lords of the Manor - notably the Barry family (12-14th century), the Earl of Thomond (17th century), Lord John Cavendish (18th century), and the Elwes family (19-20th century), the latter family retaining ownership of Billing Hall until 1930.

The original Jacobean Hall was transformed in about 1776 by Lord John Cavendish to a Georgian style house. The house was demolished in the present century and the grounds, to the north of the village, have been developed for private housing.

St Andrew's Church lies to the west of the old village, with fine views across the valley. At one time, the village extended as far as the church, but the former Lord of the Manor diverted the road and demolished cottages adjoining the church in order to increase the seclusion of Billing Hall. The church tower formerly had a spire which was struck by lightning in 1759 and fell on the church, doing considerable damage, parapets and other ornaments from the old Jacobean Hall were added after 1776 in repairing the Gothic church.

The core of the village which comprises the conservation area, is characterised by a harmony of buildings and materials. Domestic Georgian buildings, mainly of coursed rubble or stone construction with Welsh slate or tiled roofs, make the main contribution to its character. The old Post Office (1708) in the High Street and The Old Rectory (17th and 18th century), Elwes Way, are particularly fine buildings. A number of buildings are included in the Statutory List of Buildings of Special Architectural or Historic Interest. Modern housing development to the north of this village core forms a distinct contrast, which enables the northern boundary of the Conservation Area to be clearly defined. The stone walls edging the lanes in the village (Church Walk and Elwes Way in particular) give a sense of enclosure and human scale and should be retained. The inclusion within the conservation area of the stone walls on the east side of the High Street, as an individual feature, illustrates the importance attached to their retention.

Local traffic along lanes in the village does not detract from their use by pedestrians. Church Walk forms part of a main footpath routed through areas of landscaped parkland linking Weston Favell to Great Billing. Most through traffic disappeared from the village with the opening of Great Billing Way which bypasses the village immediately to the east.

The area is essentially a well-maintained residential environment; however, non-residential intrusions at the junction of Church Walk and High Street would benefit from visual improvement or screening.

Whilst the village is typified by narrow enclosed lanes, its setting gives extensive views over the Nene Valley. 'Wettons Guide' (1849) mentions that "there is a spot in the Parish from which, before the country was enclosed it is said that forty-five churches were visible".

St Andrew's Church has now been included within the conservation area, together with the attractive approach from Church Walk. Recent development to the west of the village on what was formerly Great Billing Park has drastically reduced the large open space area flanking the village although some fifteen acres are reserved as a public recreational area enabling some of the views to be retained.

Some infill developments have taken place in recent years and conservation area powers have assisted in keeping standards of development high. 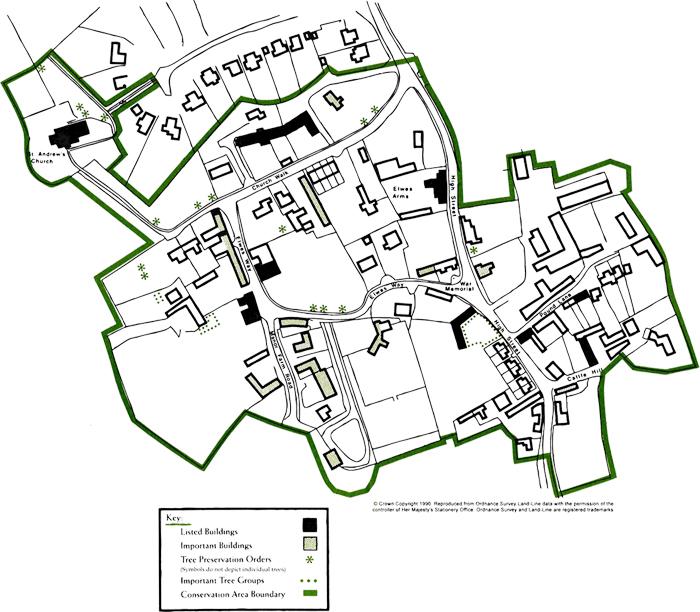