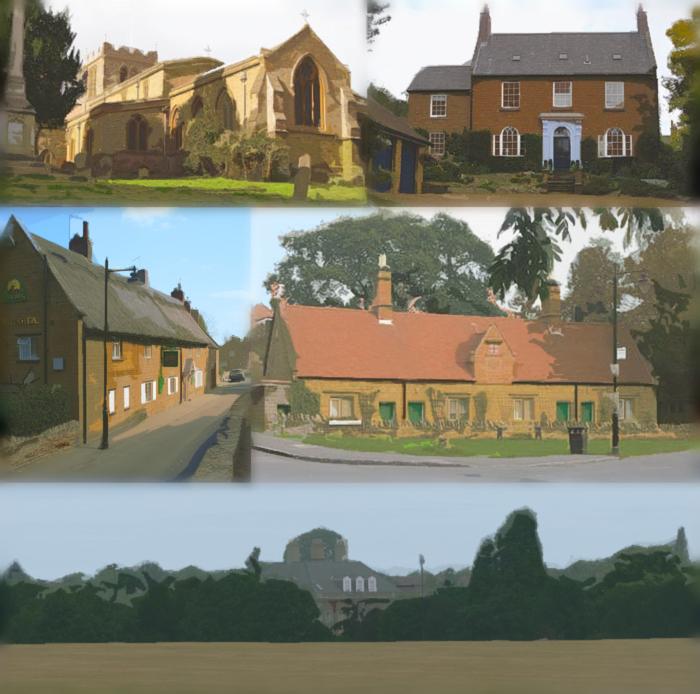 Dallington village is Anglo-Saxon in origin, and is mentioned in the Domesday Book as Dailintone, owned by Peterborough Abbey. The layout is typical of many English villages in that the Church, Manor House and Inn are all clustered close together. The 1st edition O.S. (c.1885) shows the village as a small community extending north from the church along Dallington Green and up Raynsford Road.

With the exception of the 12/13th century Church of St Mary (which replaced an earlier, Saxon edifice), the oldest buildings date from the 17/18th centuries: the Almshouses were erected in 1673, while the (former) vicarage dates from 1741. the Inn and Dallington Hall are 18th century: the Hall was constructed in 1720-30, on the site of the previous Manor House. The village hall was built in 1840 as a school.

Dallington Park originally formed part of the estate of the manor. It was donated to the town with the proviso that it should remain as a park, and opened in 1924.

The 1801 census showed a population of 302 in a village of some 60 houses. By 1841, the population had increased to 519. The village was incorporated into the Borough of Northampton in 1932, but still retains a distinct identity.

The handsome Church of St Mary stands on a mound high above road level, and the churchyard is bounded by a substantial retaining wall. Opposite the church stands the thatched 18th century Wheatsheaf Inn, next door to an even older house, Primrose Cottage.

Raynsford Almshouses were founded in 1673 by Richard Raynsford, a lawyer who became Chief Justice of the Kings Bench under Charles II, and lived at the manor house (he is buried in the church). They are still in use as almshouses for elderly people.

In 1720 Sir Joseph Jekyll, Master of the Rolls and a campaigner against corruption in all its forms, bought the old manor house from the Raynsford family, and replaced it with the present edifice, Dallington Hall, built with Harlestone sandstone. This stands imposingly on Dallington Park Road. A convalescent home for much of the last century, it has now been converted into flats, along with its associated “men’s wing” and barn. A walled ditch or ha-ha separates the hall and its garden from the park.

Dallington Ponds, to the west of Dallington Park Road, were formerly fish ponds, presumably for the use of the lord of the manor. Many fine trees line the brook and provide an attractive setting for the private sports facilities which now occupy the land.

Many infill developments and barn conversions took place during the late 1970's and early 80's, most of which have harmonised with the old village. These included the Old Dairy Farm in Brook Lane, where the scheme retains the intrinsic character of the old farm with the re-use of the brownstone rubble walling, and red tiling.

With the construction of the Dallington by-pass (Mill Lane) much of the unwanted traffic has been removed from the village, leaving the predominant atmosphere as one of peaceful tranquility.

Dallington is located approximately one and a half miles north west of the town centre, in the pleasant valley of Dallington Brook, a tributary of the River Nene. Dallington Green has one of the finest aspects of any conservation area in Northampton. The Old Forge, Raynsford Almshouses and the Village Hall are grouped around the brook with its white post and rail fences, whilst mature trees provide an attractive landscape setting.

Since the creation of Brook Lane (at the end of the 19th century), the Green itself now consists of two small triangles either side of the road, one of which houses a large oak tree providing a focal point at the centre of the village - this tree was planted to commemorate the coronation of George V in 1911.

The brook is a special element of the conservation area, providing a particularly delightful setting for the Dallington Green houses before skirting the rear of the Wheatsheaf Inn, to be seen again at Brook Lane. It is important that this pleasant feature is carefully preserved and enhanced. 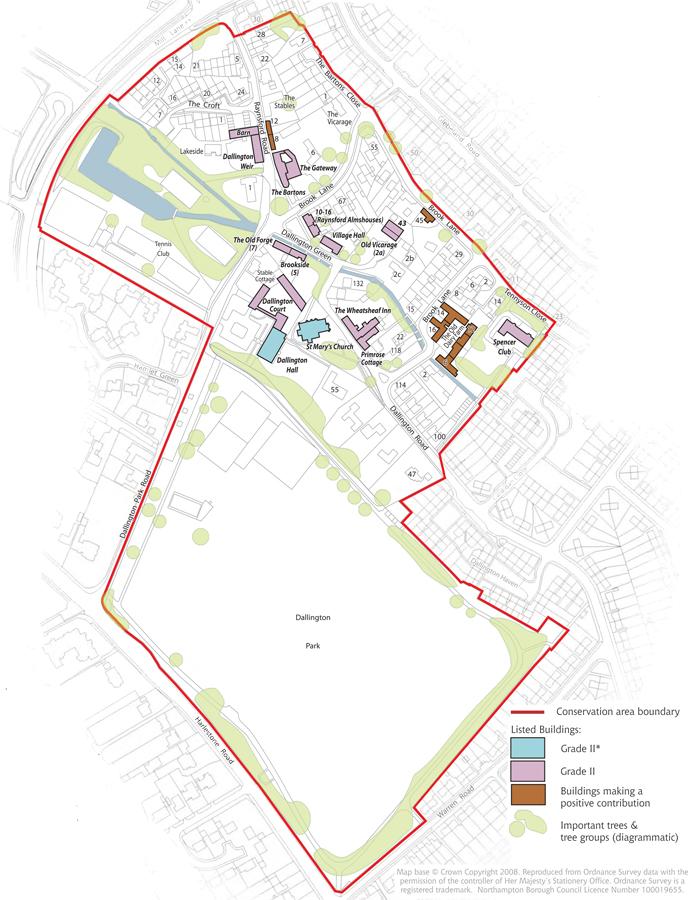