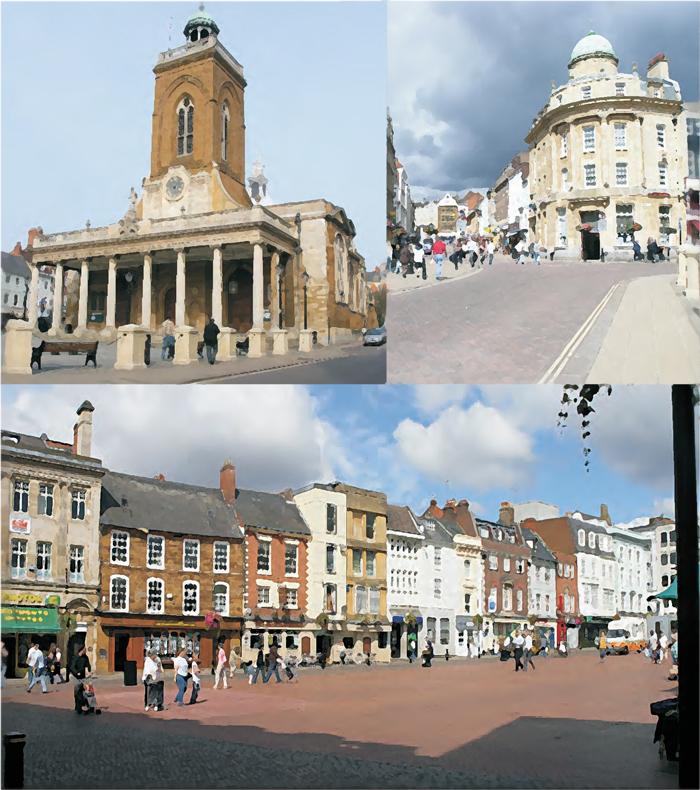 The Saxon part of Northampton was concentrated in the Marefair area; Norman and Mediaeval Northampton spread eastwards so that by the time of the Civil War the central focus of the town had moved to All Saints and the Market Square. The great fire of 1675 devastated Northampton; within the conservation area only the road pattern survives intact from earlier times. It might be expected that subsequent rebuilding would have led to a strong architectural unity, but only a few of the buildings around All Saints and in the Market Square can be traced back to the late 17th century, and there is, in fact, great variety in the style, age and quality of the buildings within the conservation area.

The Market Square is believed to be one of the largest in England. Speed’s 1610 map shows buildings encroaching on the open space, but the 1675 Fire destroyed all but Welsh House, and the Square was completely rebuilt. Its character stems from the informal scale and variety of façades, its irregular shape, and the gentle slope of the Square from north to south. Narrow lanes leading out from the southwest corner afford an interesting contrast to the large open space.

The predominant style of the buildings is Georgian, and a number of these buildings still remain in a largely unspoilt condition on the west and south sides of the Square. However, in the early 1970’s the northern side was completely redeveloped as part of the Grosvenor Centre, and much of the eastern side is now occupied by the modern façade of the Peacock Place shopping arcade. In the 1980s the Market Square was completely resurfaced in clay paviours, with a granite sett perimeter access way for vehicles and a pavement edge of York stone. Current improvements (2010) include the installation of a new fountain at the south-eastern end of the Square.

The centre of the conservation area is dominated by the Church of All Saints, rebuilt in 1676-80 (after the Fire) on the site of its Mediaeval predecessor. Funding was provided by Charles II, whose statue can be seen above the portico. Remnants of the older church can be seen in the tower and the crypt. There is a central dome, and the interior is unusually ornate for an English church. The western entrance forms one side of an attractive civic space (All Saints Square), which was completely refurbished in 2002, and is now bounded by stone pillars and a chain railing.

Behind the Church, facing Wood Hill, is the Lutyens War Memorial erected in1926. George Row contains a handsome group of buildings, including the Grade I listed Sessions House, built at the same time as the Church and flanked by the Judges Lodgings, County Hall, and nos. 8-9a, all Grade II*.

The Drapery is one of the town’s main shopping streets. The buildings comprise a variety of architectural styles and massing, and create a good sense of enclosure. The elegant curving façade of Sheep Street terminates the north end of the Drapery, whilst the view to the south is dominated by the tower of All Saints.

Gold Street is a shopping street with many fine façades worthy of preservation, notably the ornate stucco front of nos. 37/39, and the upper floors of nos 47-49.

St Giles’ Square contains some attractive buildings. Some disparity of scale exists between them but they form a pleasant group with a variety of stone facings and styles. The group is dominated by the splendid Victorian Gothic Revivalist façade of the Guildhall (a separate leaflet is available describing the wealth of detail to be found on this fine building).

Opposite is “Mr Grant’s House”, a late 17th century residence restored in 1990 after the removal of the unsympathetic row of shops hiding the front. John Grant was Governor of the County Gaol (at that time situated nearby in County Hall) from 1818 to 1845. 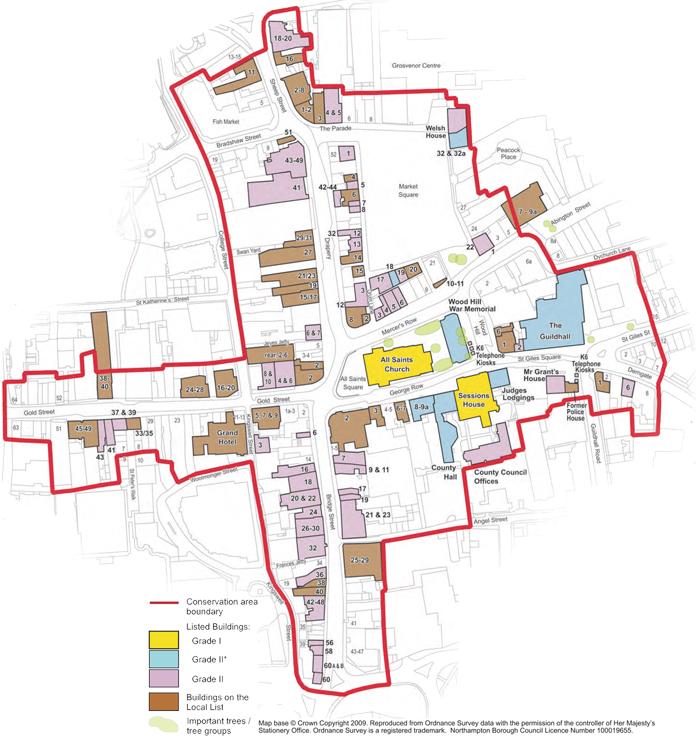