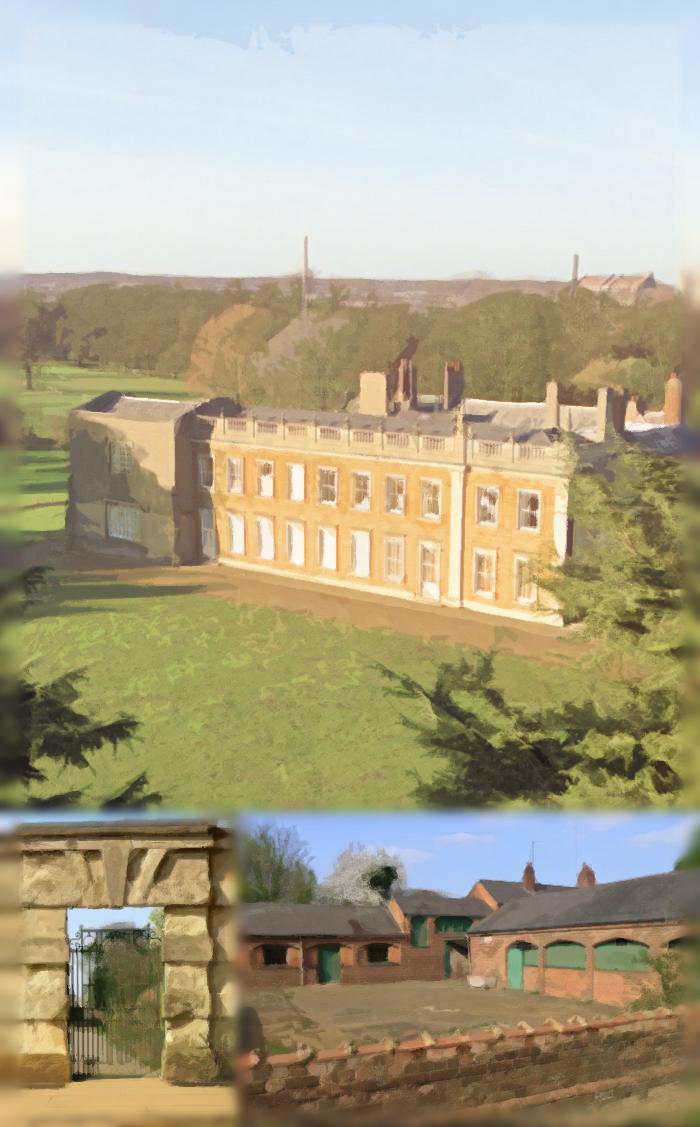 A short history of Delapre Abbey and Park

The Abbey was founded in 1145 by Simon de Senlis II, Earl of Northampton, in the meadows of the River Nene just to the south of Northampton.

The Convent of St Mary de la Pré was the first of only two Cluniac nunneries ever built in England (the other was in Yorkshire, and has not survived). The Abbey would have housed about 20 nuns, and held several churches throughout Northamptonshire.

The body of Queen Eleanor, wife of king Edward I and daughter of Ferdinand King of Castille, lay in the Chapel in 1290 on its way to Westminster following her death on 28 November. The funeral cortege set out from Lincoln on 4 December 1290 arriving at Delapre on 7 December reaching Westminster on 14 December. At each stopping point the King had built a cross in memory of his wife, twelve in all - the Eleanor Cross in Northampton is located at the southern end of London Road and is one of only three which survive.

1460 saw the Battle of Northampton between the Lancastrian King Henry VI and the exiled Yorkist Edward, Earl of March. The Lancastrians had reigned since 1422 and each family wanted their son to succeed the King. The King was captured soon after the battle commenced and was taken prisoner and held at the abbey until the following day when he was taken to London. The Battle of Northampton was the only battle of the Wars of the Roses where a defended position was successfully attacked and breached. This battle was notable as the only defended battle position during the War of the Roses to be lost. The battlefield site is on English Heritage's Register of Historic Battlefields.

The Dissolution of the Monasteries under Henry VIII saw the demise of the nunnery with the Abbess finally surrendering the buildings in 1538 following a demand from the Kings commissioner. It is thought that the buildings were surrendered willingly because if resistance was encountered buildings were usually razed to the ground. In 1543 the land and buildings were sold to John Mershe, a property speculator. In 1548 the site was purchased by or gifted to Anne and Andrew Wadham.

In the mid-17th century, Zouch Tate, a descendant of the Wadhams, carried out major alterations and rebuilding works, but kept the cloister plan form, giving a house with a central courtyard entered from the west.

He is considered to be responsible for many of the alterations enabling the building to be used for domestic purposes - the new West front, conversion of the North wing and alteration of the east wing. Mary Tate inherited the property in 1749 and with her husband Charles Hardy remodelled the South front, the wing containing the principle reception rooms.

In the early 18th century, the south front was rebuilt, providing a series of prestigious rooms for entertaining. Subsequently, Admiral Charles Hardy added a new “eating room” but the early death of his wife put paid to further plans and for while the house was tenanted, until the Bouverie family bought the site in 1764. The family owned the building until 1946, during which time they added a new library on to the south-west corner of the house.

The War Office requisitioned the property in 1940, when Mary Bouverie .The last Bouverie, Mary, moved to Duston following the auction of the house furniture, and died in 1943. The abbey and the surrounding 586 acres were sold to Northampton Corporation in 1946. The building housed the Northamptonshire County Record Office until 1992, since when it has been used partly as flats until a permanent use can be found for the building.

A description of the Abbey

The Abbey and its grounds are located alongside London Road, on the opposite side of the river from Medieval Northampton – a fairly common location for abbeys, monasteries and nunneries.

The Abbey (with its associated buildings) forms the nucleus of the conservation area. While traces of Medieval fabric remain, the house has been extensively altered and added to during its period as a residence.

Clustered round the main building on its east and north sides are the former stables and coach house, a house (Abbey Cottage), and a thatched game larder. Adjacent is the “Billiard Room” or Orangery, which used to be connected to the main house by a large Victorian conservatory, but this was removed in 1958.

At the end of the long, straight, tree-lined drive is a small single storey lodge built of stone in a similar style to the west front of the Abbey, with a Dutch gable, and castellated parapet above the door.

North of the main complex are some 19th century outbuildings still in use as stables, along with a number of private houses, presumably built for staff employed on the estate.

The Conservation Area includes part of the grounds of the former country house, now mostly given over to recreational use. Included within the Abbey complex is the walled garden, surrounded by an outer garden with trees, lawns and water features. Several works of art are on display within the walled garden, including two brick sculptures, a former font, and a statue (originally a fountain) – “Woman with Fish”, created by Frank Dobson for the 1951 Festival of Britain.

The principal feature is the west front, mainly C16-17, with battlemented parapets. The 17th century porch has an arched opening with fluted Tuscan columns on either side supporting sections of entablature crowned by ball finials. On either side of the porch at both ground and first floor level are eight light mullioned and transomed windows. On the northern side of the main entrance block are two 3-storey gables, one in the Dutch style and one more vernacular, both with mullioned three light casements with drip moulds. On the south side is a 19th century Gothic library extension in grey stucco.

The only building within the conservation area not associated historically with the Abbey is the most recent – The Boughton Centre: a day care facility for the mentally handicapped erected in 2007. Its entrance is from Ransome Road, not through the grounds of the Abbey. It does not feel as though it belongs in the Conservation Area. 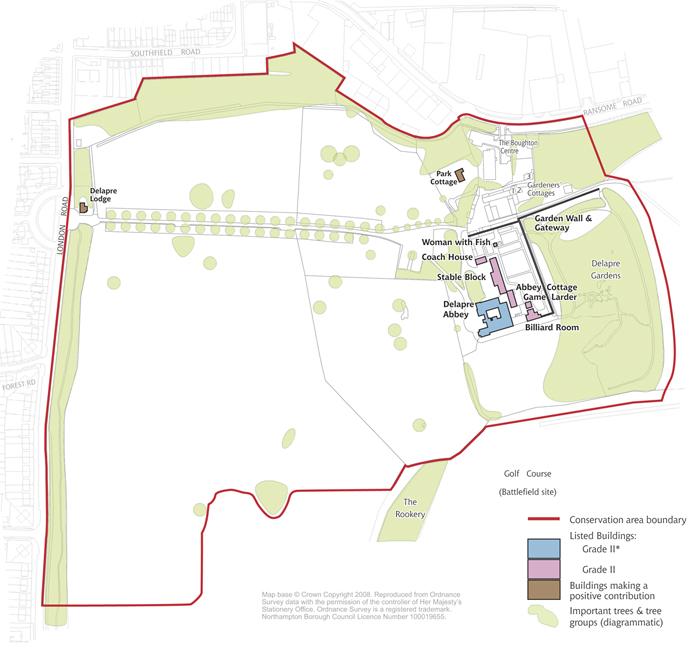